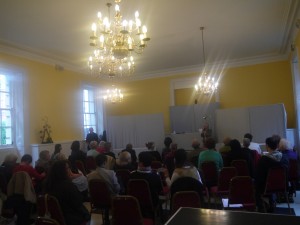 Ikebana International Chapter No 6 held its Annual General Meeting & Demonstration. This year the AGM members only. It was followed by a demonstration.

Firstly, Tricia Hill, President of the Chapter, introduced the demonstrator.

We had a phenomenal audience at the demonstration given by Mr Jeroen Vermaas, a Master of the Ichiyo School of ikebana. Mr Vermaas , who came all the way from the Netherlands, gave us a brilliant and extraordinary presentation. It was based on line balance and construction without a Kenzan. 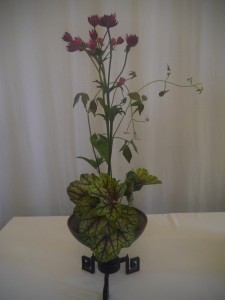 For his first arrangement he used Begonia leaves and aquilegias as plant material which he placed in a traditional metal ikebana container showing us the simplicity and beauty of the arrangement. 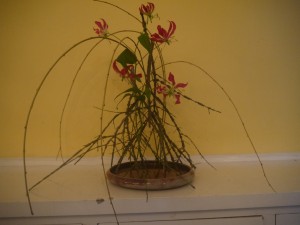 The second arrangement showed a balance between branches, Willow

and delicate Gloriosa which were placed on a ceramic container. 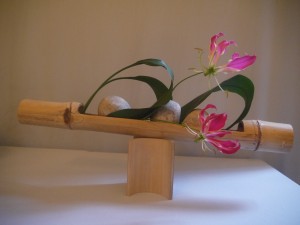 For the third arrangement he used a bamboo container, a balance

Between stones, water, Aspidistras and Gloriosa. 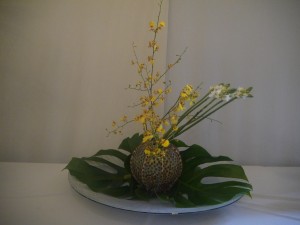 For the Fourth arrangement he used a glass container with a ceramic container on top. For plant material, he used Monstera leaf, Hosta flowers and oncidium Moth orchids. 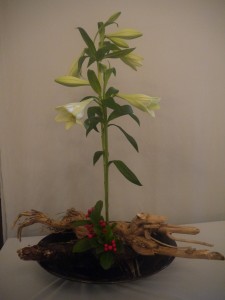 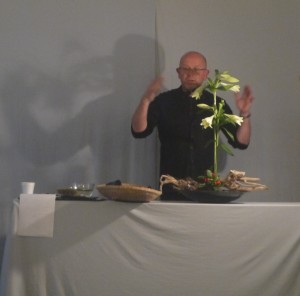 His fifth arrangement was made using a kenzan

with dry wood and Brugmansia. With delicate red berries in a glass container 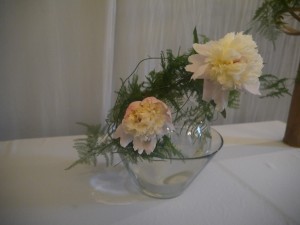 On the sixth arrangement, he mounted a glass container over another glass container. He placed very delicate Asparagus plumosus with Peonies coming from Tricia’s garden. 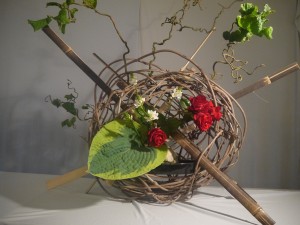 The final arrangement was constructed of a woven Wisteria

basket with a ceramic container placed inside.

The construction wrapped around with Colyrus Avellana Contorta,

added a splash of colour to the arrangement. 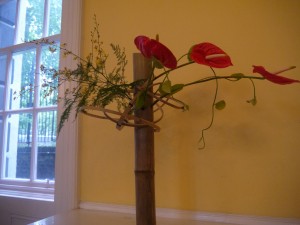 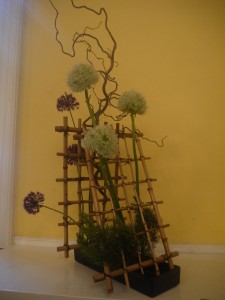 He had two extra arrangements that he prepared for us before we entered the room, enhancing the room and giving us the atmosphere of his creations. The first was on a bamboo container with red Aspidistras, Asparagus fern plumosus, Moth Orchids and Bamboo shaped into Ovals.

The second arrangement had a Bamboo structure in a ceramic container making the balance with pine, Colyrus Avellana Contorta. 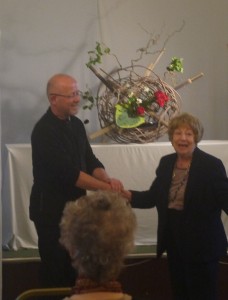 We thanked Mr Vermaas for the wonderful Demonstration.

It was a pleasure for all of us to watch and learn about his brilliant talent and knowledge Of Ikebana, we really enjoyed it.