We held our annual exhibition ‘Autumn Glory’ on 11th October. There were 24 arrangements from students of all the main schools including Ikenobo, Sogetsu, Ohara, Ichiyou, Nippon Kado Koryu and Koryu.  Each showed their own schools’ distinctive method  using branches, coloured and dried leaves and seasonal flowers. Overall we were treated to a wonderful display of autumn beauty, its glorious colours and also its more subdued and subtle hues reflecting the seasonal decay but with  the seeds of the future.

We were delighted that Mr Shinichi Iida, Minister of Public Diplomacy and Media from the Japanese Embassy attended with his deputy Ms Tomoko Yoshihiro and assistant Ms Megumi Spivey in spite of their busy commitments.

Two demonstrations were given. Mrs Junko Kikuchi from the Ikenobo school and Mrs Shoko Koizumi-Hanson from  Sogetsu , each giving their  distinctive takes on the autumnal theme. 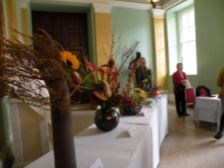 Sogetsu on the left in the entrance hall and then the Ikenobo displays. 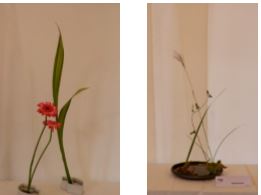 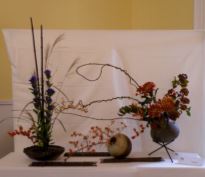 Two Ohara arrangements and then a joint display of  Ichiyou 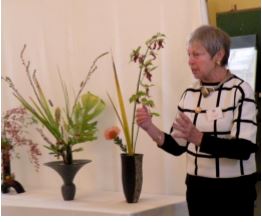 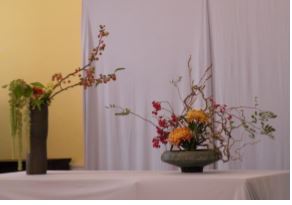 Junko’s display arrangements being placed by our president and then Shoko’s sogetsu demonstration arrangements.