by masters of Sogetsu and Ohara and Ichiyo Schools

with a theme of the Christmas season.

Our first demonstrator was Irene Moore of the Sogetsu School.  Irene told a little about the Sogetsu School and its history.  her first arrangement was suitable for a large buffet.  A beautiful glass ring held pieces of mitsumata and in the centre a poinsettia and a candle were placed – just right for Christmas. 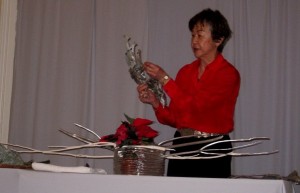 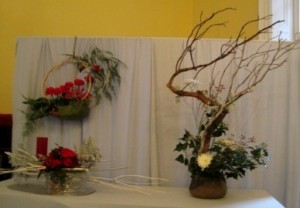 Irene then made a hanging arrangement where a basket was made from covered copper wire  and filled with carnations, asparagus fern, roses and leaves.  Irene’s last arrangement was very dramatic with wintry branches hung with stars and white chrysanths, holly, red berries and fir cones.

Next, Hisako Bourlet spoke of the Ohara School and its introduction of the moribana arrangements in flat dishes and kenzans.  The first of her three arrangements was a new design by the latest headmaster – a crossing style.  Hisako used red gerberas, green anthurium, leaves and bleached broom.   Next in a striking black and white pot, Hisako placed two ornamental white cabbages and a holly branch with berries.  The last arrangement was of yellow roses and a flowing branch across the white bowl. 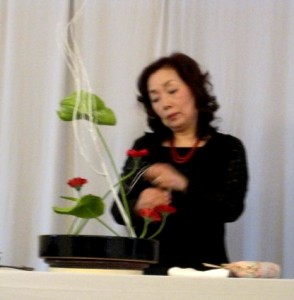 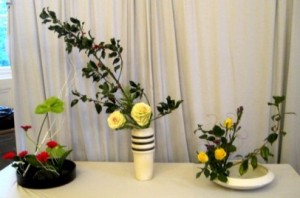 Lastly, Tineke Robertson made three arrangements of the Ichiyo School.  Tineke opted for lights to enhance the Christmas feeling.  Her first arrangement however, was a novel idea – making a gold bag around her design of holly, pine, red rose and gypsophila.  Then in black containers on a red base, Tineke placed gilded kiwi branches  with holly and finished with a pot of white cyclamen, red candles, and silver balls and lights.   The last arrangement was of red gerberas in a black pot with pine and red berried skimmia, with small lights overall. 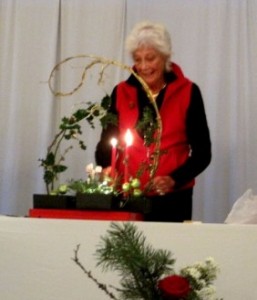 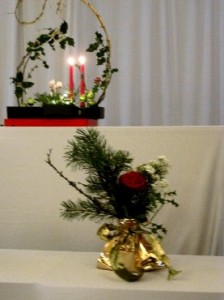