We were delighted to welcome Mary Marques and her daughter Linda, who both came over from Zimbabwe just to do our demonstration. Mary is a Sogetsu teacher and demonstrator. Her cv however revealed she has a long and distinguished history.She started learning in 1970 and was president of ii Harare chapter from 1988-94 (which has now sadly closed and has demonstrated and run many workshops at home and abroad.
Her theme was ‘on the wild side’ reflecting her profound belief that animals are fellow travellers on earth to be valued and respected in their own right.

Mary evoked her theme by a wonderful set of arrangements that represented different African creatures  and environments. The first three shown here from  right to left are waterhole, impala and meerkats. 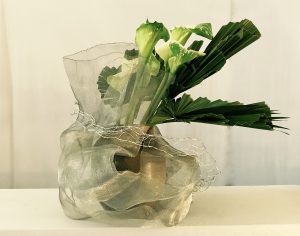 We then had an elephant using lilies and palm leaves as the head , whilst grey mosquito netting wrapped around the vase was the body, 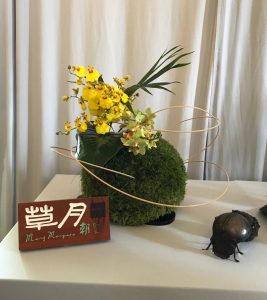 Everyone’s favourite was probably the dung beetle, small but vital to the environment. Here mary made a ‘dung ball ‘out of moss on oasis bases with orchids, adding a sense of movement from some cane circles (not to be confused with the planet Saturn ) 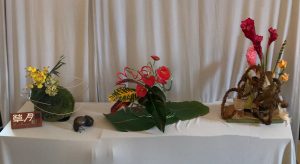 The two arrangements on the right area a  colourful chameleon and then the snake.  Maybe they are less popular creatures. but are sadly declining and deserve their place. The chameleon is represented by brightly coloured anthuriums on a palm mat. Mary showed her ingenuity with the  snake arrangement using a circular bird feeder as the base and then ginger flowers as lookalike snake heads.

Finally I leave you to guess the last arrangement. Hint – it is a prickly creature whose spines were made  into the backing screen by mary. 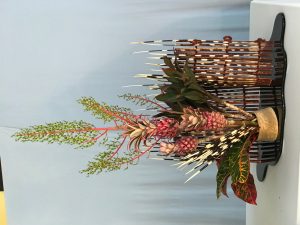